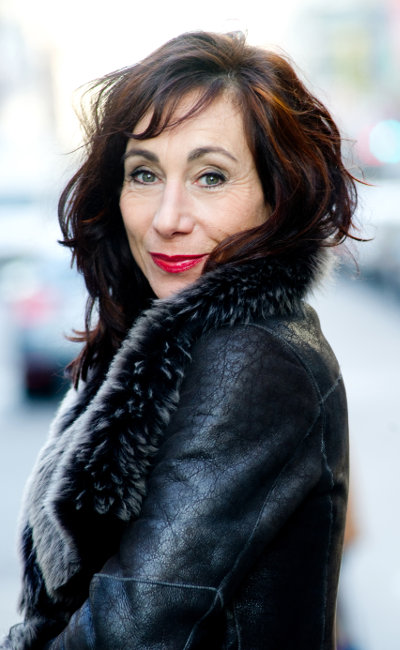 Andrea Eckert was born in Baden. After graduation she went to Paris where she studied literature. Later she studied acting with the famous actress Dorothea Neff. She has had engagements with theaters throughout Austria and Germany, such as: Kornmarkttheater Bregenz, Linzer Landestheater, Schauspielhaus Wien, Frankfurter Schauspielhaus, Wiener Burgtheater, Wiener Volkstheater and Theater in der Josefstadt.

1991 she played the role of Judith by Friedrich Hebbel at the Wiener Volkstheater and established herself as one of the leading actresses of the Viennese theatre community.

Since then, she has played a variety of leading roles f.e. in Mary Stuart by Friedrich Schiller, Clara S. by Elfriede Jelinek, Anna Galactica by Howard Barker, Sophocles’ Electra, The Good Person of Szechwan by Bert Brecht, Big and Small by Botho Strauß, Iron by Rona Munro, Penthesilea by Heinrich von Kleist.

Already an acclaimed actress, she won many new fans when she appeared as Maria Callas in the play Master Class by Terence Mc Nally. More than 170.000 spectators saw the play which ran for 11 years at the Wiener Volkstheater. For her stunning performance she was awarded with the Kainz Medaille and the Karl Skraup Preis.

2011 she starred in the debut performance Du bleibst bei mir (You will stay with me) by Felix Mitterer and was nominated for the Nestroy Preis.For her role as Dorothea Neff in Felix Mitterer´s play Andrea Eckert won 2012 the Dorothea-Neff-Award for best performance as well as the award Audience's Favorite Actress (Preis für den Publikumsliebling).

2012/2013 Andrea Eckert played Greta Keller at the Wiener Volkstheater in the play Bon Voyage by Rupert Henning and was nominated again for the Nestroy Preis.

2013/14 she plays Queen Elisabeth in the drama Maria Stuart by Friedrich Schiller at the Wiener Volkstheater. In 2010 Andrea Eckert received the honorary title Kammerschauspielerin (a title awarded by the Austrian president).

She regularly appears in a number of film and television productions and gives guest performances with music programs and readings in the German speaking part of Europe.

She made her debut as a filmmaker with the documentary film Alles ist ein Wunder, a portrait on the vaudeville artist Lucia Westerguard. Her second directorial work Vom Glück verfolgt. Wien – Hollywood – Retour is a portrait on the Hollywood actor Turhan Bey. It was shown at the Viennale in 2002. Further, she made documentaries on the life of the extraordinary Josefine Hawelka – Königin Josefine, on the actor Walter Schmidinger – Mit den Zugvögeln fort and a portrait of the Viennese emigrant Eric Pleskow – I’m about winning, who was one of Hollywood’s most influential film tycoons. This movie premiered at the Viennale in 2006.

Currently, she thrills the audience with the biographical one-woman show "From Vienna into the big wide world," about the world-famous Lotte Lenya. In this show she tells through the famous chansons the dazzling life of this great artist and makes the fascination of a former big star rise again.

Promoters please note: if you wish to include this biography in a concert programme etc, please contact M.A.M. Management to ensure that you receive the most up to date version